I’m so excited to share with you that I have a new course on Pluralsight: EF Core 6 Fundamentals. I’ve been working on it for a while and it is the biggest course I’ve ever created. It is 7.5 hours long. It’s a lot more than the breadth of the previous Getting Started courses.

And there’s an additional bonus. Pluralsight is having a sale on subscriptions right now. 33% off through May 12, 2022.

There are 16 modules if you count the course overview which is just a 1.5 minute “trailer” about the course. This is not just a refresh of the recent EF Core 5 Getting Started course. In fact, I retired the samurais and have introduced a book publisher as the domain this time. Below is the list of module titles for my new course.

I’ve also posted the sample code for the course in this repository on my Github account.

I’d also like to give a shout out to my friend and fellow Pluralsight author, Roland Guijt, who acted as tech reviewer as I created this course. His feedback and insights were invaluable as is evident not only in the final version of my course, but in his own courses on ASP.NET Core, C# and more. While many of you who read my blog are already Pluralsight subscribers with work or personal subscriptions, there are so many who do not have access. So Pluralsight is opening up the entire library of over 7,000 courses for people to watch while stuck at home. And you do not need to use a credit card to sign up.*

Or any of the other 7,000+ courses from some of the most knowledgeable devs who happen to be great at teaching ….

There is also a free plan for business accounts.

Business Free April Details: “To support your team’s skill development during these new challenges, for a limited time we’ve extended our free team trial from 14 days to 30 days.” 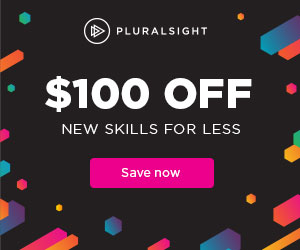 Pluralsight is having a summer sale on annual subscriptions – $100 off (i.e. $199 for an entire year’s access to the entire library) which is a pretty amazing price for what you’re getting. Heck the regular price of $299 for a full year is amazing when you compare it to the cost of almost any type of training from the expert-authors). Anyway, I don’t have to tell you, you already know!

I totally forgot to look for this after my Entity Framework Core: Getting Started course was published on Pluralsight.

I have 30 day free trial codes if you need one! Just let me know here.

My Pluralsight course, Entity Framework Core: Getting Started, is a pretty thorough exploration for learning about EF Core. But at 5 hours, it may not be the VERY first thing you want to look at. So I’ve created some 12 minute videos on Channel 9 that will, in that very short time, walk you through building some tiny apps that use EF Core so you can get your hands dirty. While you won’t learn much in the way of ins & outs, they will walk you through:

That’s a lot for 12 minutes, but I have done it in a way that you can just watch and learn, or follow along to build the apps yourself . For some of the code that is not related to the EF Core lesson, you can even copy that code from my GitHub account and paste it into your solution.

There are currently 2 videos. EF Core in an ASP.NET Core Application Using Visual Studio 2017
This video will give you the full leading edge .NET Core experience as you use the brand new Visual Studio 2017 to create a tiny ASP.NET Core MVC App that uses EF Core to interact with the data. Again, some of the code that is not about EF Core is available to copy/paste from my GitHub account, making it easy to follow along with the demo. I’ll be adding anther one showing  Creating an ASP.NET Core App with EF Core Using Visual Studio Code in OS X . You can keep an eye on my Channel 9 Niners page or this blog to see what that gets published.

When your ready to really learn about EF Core, head over to Pluralsight for my Entity Framework Core: Getting Started Course. If you don’t have a subscription, contact me for a 30-day free trial code. I’m happy to share a new course on Pluralsight with you – Entity Framework Core: Getting Started.

Here’s how I described it in the trailer:

Most software – whether for business or entertainment – is driven by data that users need to interact with. In Entity Framework Core: Getting Started, you will learn how to use Microsoft’s modern data access platform, Entity Framework Core. You will learn how to build data models, use EF Core to bridge your software with  your data store and how to incorporate all of this into desktop, mobile and web applications. When you’re finished with this course, you will have a foundational knowledge of Entity Framework Core that will help you as you move forward to build software in .NET, whether you are targeting Windows, OS X or Linux. Software required: Visual Studio 2015 or Visual Studio 2017. Here is the list of modules in the course. You can see the titles of various clips in each module on Pluralsight.

To see the full list of my courses on Pluralsight, go to pluralsight.com/authors/julie-lerman

Pluralsight has published my latest course, a 2.5 hour course about Entity Framework 7 (EF7).

“Looking Ahead to Entity Framework 7”

EF7 is not released yet. It will get released as a “pre-release” along with ASP.NET 5 so that there is a data stack available for projects that target the CoreCLR. Then the team will do a lot more work on EF7 for a full release possibly (wild guess) at the end of 2015. There are a lot of changes since EF7 is begin rewritten from the ground up. Many new features – from things like Batch Updates that we’ve been asking for since v1 to totally new concepts like being able to query and update against non-relational data stores. But there will also be things that do not get carried forward – most notably for some is the EDMX, the designer based entity model.

This course will show you what’s coming, what’s going, demonstrate a lot of the new features (as they are currently …aka the Alpha or earlier versions) and provide guidance about deciding if and when to move to EF7.

You can see the more detailed Table of Contents here.

I’ve already gotten some great feedback on the course. My favorite tweet so far was:

“Great info and insight. I don’t know if I’m happier with what’s being added or being removed.”

Check it out and let me know what you think of EF7!